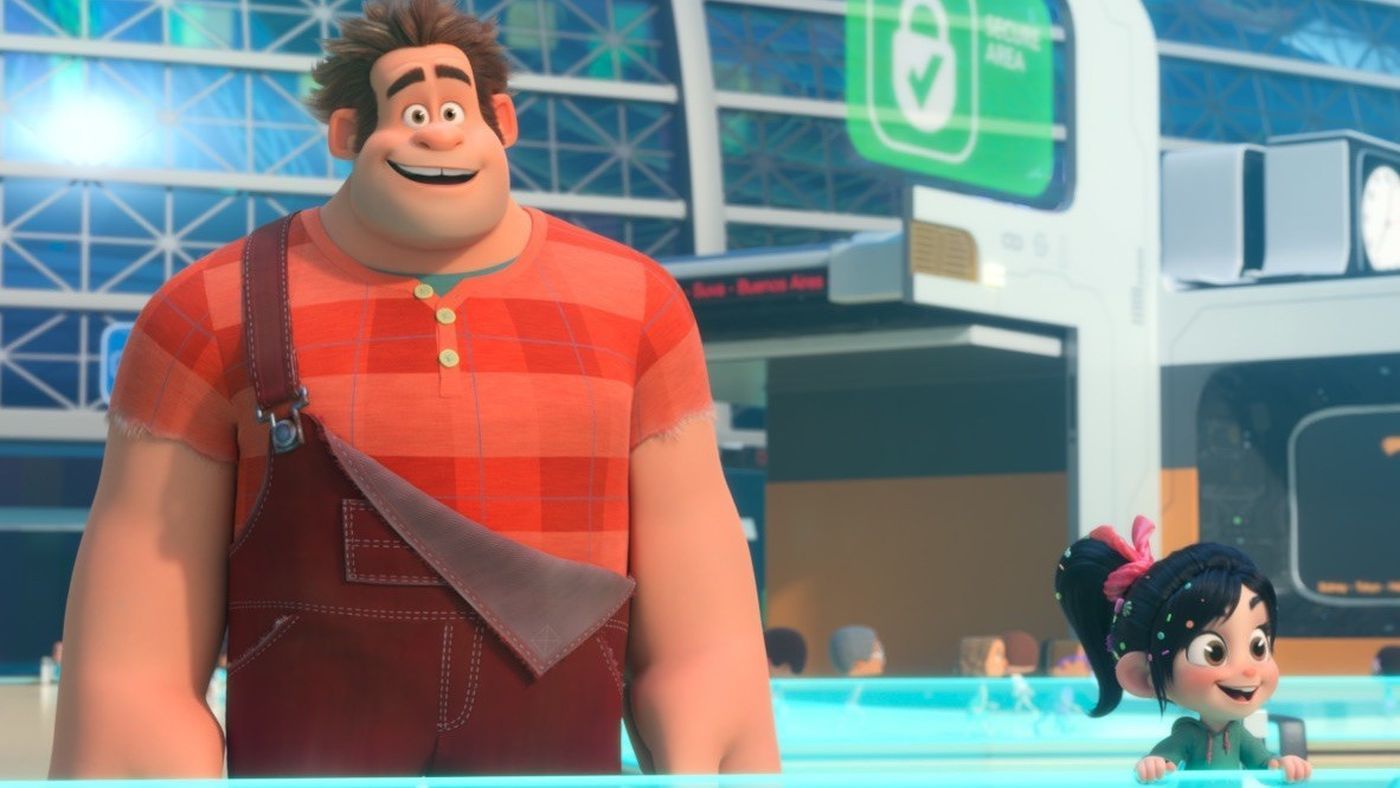 Wreck-It Ralph is easily one of my favorite animated movies. At the time of its release, back in 2012, I was a 16-year-old that tore tickets, cleaned theaters, and filled concessions at AMC. On the day it premiered, I remember cleaning theaters and waiting for children, teens, and adults alike to exit the screening. I could hear everyone’s reactions as they strolled out -- It immediately piqued my interest. Honestly, I probably wouldn’t have checked it out if it hadn’t been for everyone and their mother saying how much they loved it, and I’m SO glad that I did!

Ralph, voiced by John C. Reilly in a truly perfect casting choice, is a bad guy who is really tired of being the “bad guy.” For 30 years, he’s been the villain in an arcade game called Fix-It Felix, Jr. where he pops up to wreck a building that is eventually put back together again by Fix-It Felix -- but for once, he wants to be the hero. To help aid his troubled thoughts, he attends weekly Bad-Anon meetings in the company of various other classic arcade baddies who all live by the affirmation, “I’m bad, and that’s good. I will never be good, and that’s not bad. There’s no one I’d rather be, than me” -- it isn’t enough for this big ol’ softie, though. He winds up going “turbo” – a term used to describe characters in games that go rogue and begin game-jumping – and heads off on a journey to prove that he can be a hero, too! Along the way, he meets Vanellope von Schweetz, voiced to high-pitch perfection by Sarah Silverman, who comes with her own set of problems within her game – namely, she has a glitch. This has made her an unplayable character in the sugary sweet racing game Sugar Rush. So the two set out to break the status quo and, while on their journey, form an incredible friendship.

Ralph Breaks the Internet starts off six years after the events of the first film. We're once again back with our favorite duo who are hanging out and discussing life while character-watching in Game Central Station and later heading off to have root beers at Tappers. It’s the kind of bond between friends that many adults can giggle and relate to. Soon, a new system is plugged into Game Central Station: WI-FI. This magical new world is not available for characters to explore just yet, but Vanellope sees it as an opportunity to try out something new and different. So when her game is at risk of being shut down and requires a new part, she and Ralph set off into the vast open space of the internet to find it.

Their entrance into the internet is not only a gorgeously animated scene but so incredibly detailed that you’re guaranteed to find more apps and websites hidden away upon a second viewing of the movie. From older sites like Friendster to major apps like Snapchat, there’s so much to look at that it’s almost overwhelming. This includes pop-ups, which make their appearance in a hilariously abrupt fashion, and even the dark web! That’s easily one of the best parts of this movie -- it knows exactly what it’s working with and how to execute it with its audience.

Upon their arrival, they head to the KnowsMore (Alan Tudyk) search engine to hunt down eBay. After a misunderstanding as to how bidding works, they find themselves in need of $27,001 for the part. On the hunt to find cash, they interact with classic spam pop-ups (including the all-too-familiar: “wanna get rich playing video games?”), try their hand at going viral on Buzztube (Buzzfeed/YouTube) with the assistance of its sassy head algorithm named Yesss (Taraji P. Henson), and even wind up in a Grand Theft Autoesque game known as Slaughter Race. It’s within the intense hellscape of Slaughter Race that we meet the cool-as-a-cucumber stunt driver named Shank. Shank, voiced by the equally cool-as-a-cucumber Gal Gadot, is surprisingly easy-going despite the bleak and terrifying city she resides in. Her and her “family”, a definite play on the Fast and Furious franchise, are instantly lovable and capture the attention of little Vanellope. She feels as though she’s found her home, but leaving Ralph behind and making the decision to stay there instead is the internal battle that she now faces. She falls in love with the wild metropolis of the internet, and now she must learn how to embrace her passions and be independent. This is aided slightly by the Disney princesses in some INCREDIBLE scenes that’ll have you keeled over laughing. Seriously, they're some of the best scenes in the movie.

Ralph Breaks the Internet keeps a steady and incredibly hilarious pace in its first two acts. By the third, it falters a tad and begins to break its stride. The story starts to drag on and you can really feel that near two-hour runtime. It almost seems a little unsure of what exactly it wanted for an ending. This doesn’t mean that I hated the film -- on the contrary, I actually really loved it, its story just exhausts itself towards the end. Despite this, it contains insightful messages and an overall premise that's brilliantly thought out. It's a delightful concoction of lovable characters and an enjoyable story, with just the right amount of adult humor sprinkled on top, that follows-up to its original and heartfelt predecessor with gusto! Truly a Disney film perfect for every age.