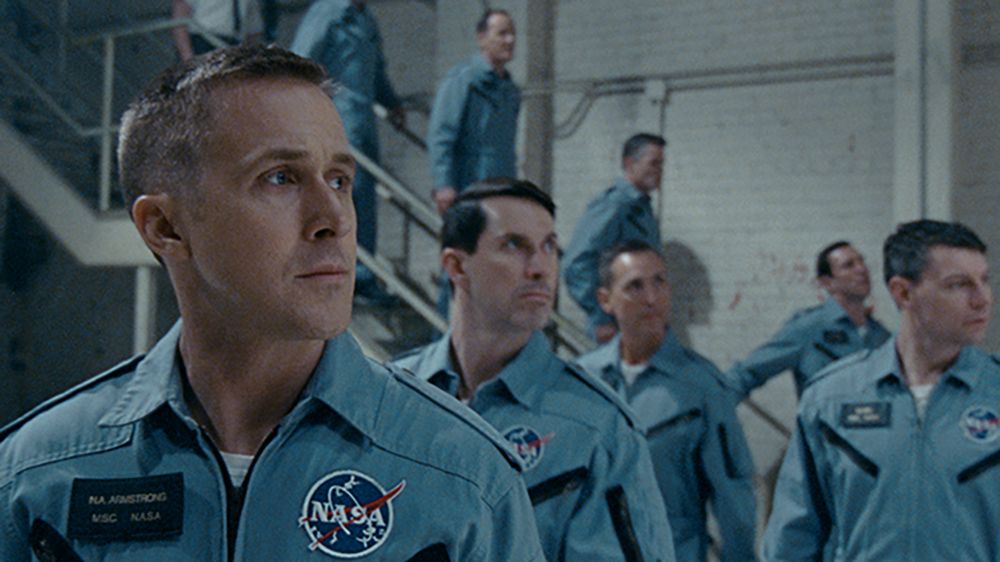 Damien Chazelle has proved to cinephiles all around the world that he isn’t confined to one genre. From his first jazzy movie musical Guy and Madeline on a Park Bench in 2009 to the intense drama Whiplash in 2014 to the colorful and wondrous musical La La Land that swept us all off our feet in 2016, he seems to transition flawlessly - always keeping a little bit of jazz in his back pocket to sprinkle into his stories.

Now, we’re escaping the city of stars and heading up into a galaxy of stars.

Chazelle didn’t slow down after winning his Best Director Oscar in 2017. In fact, his next film had already been in development for quite a while. With the help of Oscar-winning screenwriter Josh Singer, Chazelle teamed up once again with Ryan Gosling to tackle something new and different: a biopic. First Man chronicles NASA’s mission to land a man on the moon, with Gosling playing astronaut Neil Armstrong.

Chazelle delivers his most audacious work to date while telling a very personal story.

Shot on grainy 16mm and 35mm film, with the occasional IMAX 70mm, the opening scene takes us back to 1961. Accompanied by a slow-building score from Damien Chazelle’s longtime musical collaborator Justin Hurwitz, the first shot has us hurtling up into Earth’s atmosphere alongside Neil in an X-15. The anxiety is palpable as the ship rattles upward. The combination of incredible sound design and shaky camera movements leaves you white-knuckling your arm-rest feeling hopeless and claustrophobic. When the chaos comes to a pause, we get a fleeting glimpse of the magnificence that lies outside the ship, appearing almost peaceful in its never-ending darkness. This tranquil moment is short-lived as things begin to malfunction, and Neil realizes that the rocket is unable to descend. He fidgets with buttons and finds himself bouncing off the atmosphere and struggling to regain control. He’s soon able to stabilize the craft and make his way back down to the Earth’s surface, but Chazelle does an incredible job at capturing these moments of peril and making you question the story that you already know. It’s a recurring pattern throughout this film that helps to keeps you on the edge of your seat.

From one distressing scene to another, we then see Neil and his wife Jan, played by Claire Foy, watching their daughter Karen in a hospital room. We learn that Karen is suffering from a brain tumor. She passes away and Neil believes, during his grieving period, that he can start anew by applying to NASA’s Gemini program. He’s accepted and the family moves to Houston.

Compared to movies like Apollo 13, Chazelle put his focus on the astronauts and the things that they hear in their day-to-day life instead of zeroing in on the final frontier. It almost feels as if there’s added anxiety from this point of view. When you’re constantly hearing about malfunctions and having to accept the losses of your friends, it’s easy to see how traumatic the process is. Everyone wants to move up the ladder, and everyone knows the cost. As the space race grows in intensity, so does the competitive and obsessive nature surrounding the program and everyone within it. We slowly watch Neil become emotionally detached from his family and friends the more that he climbs the ranks.

Gosling delivers a compelling performance as Neil. He’s an incredibly smart engineer with a can-do attitude who has also grown accustomed to burying his feelings deep below his stoic exterior. His wife Jan (Claire Foy) carries the emotion in the story and makes the most out of the little screen time that she has. She’s honest with her anger and anxieties and you can understand it as the viewer. She knows what his job entails and that there’s absolutely no guarantee that he’ll even make it back alive. She’d rather confront that truth than bury it.

First Man is a marvelous spectacle and an astounding feat for Damien Chazelle. It celebrates the success of Apollo 11, but acknowledges the long and heartbreaking path that Neil took to get there – and that’s the most important piece in its out-of-this-world puzzle.